Spanish painter Diego de Silva y Velázquez (1599-1660) was one of the most renowned artists of the Baroque era. In Disgraced, Emily creates a portrait of her husband, Amir, inspired by Velázquez’s Portrait of Juan de Pareja. Learn more about some of Velázquez’s masterpieces below! 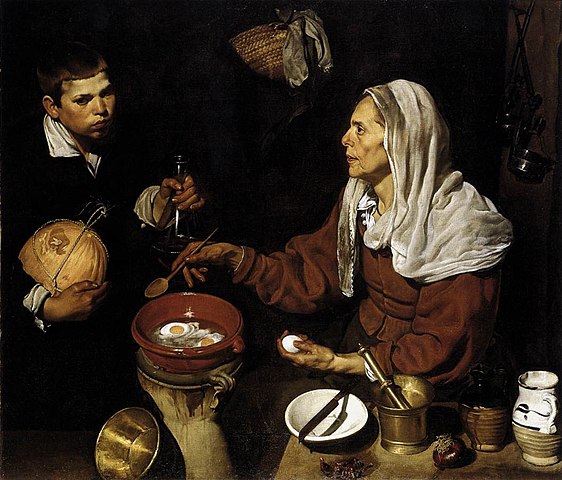 This is one of the most famous paintings from Velázquez’s Seville period, which was the earliest stage in his development as an artist. This work is a bodegón, a painting of a scene from everyday life. This work is renowned for its incredible detail and realistic use of lighting, especially in the reflection of light on the oil in the frying pan.

Another of Velázquez’s bodegones from his Seville stage, this painting is unique for its use of perspective.  The introduction of a window into the painting allowed Velázquez to transmit two scenes into the work. In the foreground, we see a portrait of everyday life; while in the background, we see a more ornate, religious image. Velázquez would revisit this two-scene concept in later works.

This painting, also known as Los borrachos (“The Drunks”) was created towards the end of Velázquez’s Seville stage and is one of many works with a mythological theme. The Triumph of Bacchus is renowned for its extraordinary profundity and the detailed expressions on the faces of the drunk and happy men surrounding Bacchus, the god of wine. Velázquez’s paintings on the whole are distinguished for their intense emotionality and humanity; the artist’s ability to represent the range of human emotion in his paintings is astounding.

Velázquez painted this work during his first trip to Italy, and it was later purchased by King Philip IV in 1634. Like The Triumph of Bacchus, this painting also has a mythological theme. Velázquez was clearly influenced by the artwork he saw in Italy, as evidenced by the precision apparent in the human bodies in the painting.  This work is also unique because of its brightness and use of lighting.

The Surrender of Breda, alternatively known as The Lances, is Velázquez’s only surviving work with a historical subject matter. The painting was a royal commission, and it depicts Spanish general Ambrogio Spinola’s victory over the Dutch town of Breda in 1625.

This work is one in a series of portraits of bufones, or court jesters at the royal palace. In each of the portraits in the series, Velázquez bestows an innate sense of humanity in the subjects, and they are among the artist’s most moving works. This portrait of Francisco Lezcano, a dwarf and court jester in King Philip IV’s palace, is one of the most famous to emerge out of this series.

This commissioned portrait was painted on the artist’s second and final trip to Italy. Velázquez’s Portrait of Juan de Pareja, which serves as Emily’s artistic inspiration in Disgraced, was painted as preparation for this work.

A mythological-centered painting, The Rokeby Venus depicts Venus, the goddess of love, with her son Cupid, who holds a mirror for her to both admire herself and gaze at the viewer. Portraits of female nudes were rare in Spain as they were met with disapproval by the church; this is Velázquez’s only surviving painting with this subject matter.

Las hilanderas (The Spinners, alternately known as The Fable of Arachne) plays with the concept of perception and also has a mythological theme. In the foreground, we see five ordinary women preparing the wool for the creation of tapestries. In the background, we see another group of five, more elegantly dressed women. The woman brandishing a sword represents the Greek goddess Athena, who challenged the prideful mortal Arachne to a weaving contest.

Las meninas (The Maids of Honor) is Velázquez’s most famous painting. Painted at the end of the artist’s career, Las meninas depicts the infant Margarita, daughter of King Philip IV and heir to the Spanish throne, surrounded by her ladies-in-waiting. Velázquez incorporates a self-portrait into the piece; he can be seen at his canvas in the left-corner of the painting. In this way, Las meninas represents a more intimate moment in the life of the Spanish royal family as the painting gives the viewer a glimpse into Velázquez’s artistic process.